Aachen the greatest sire to stand in South Australia

This amazing bay stallion’s contribution to harness racing can be described as folklore.

A winner of 27 races in just 32 lifetime starts exemplifies his racing career.

An astonishing feature being that he won his first 20 starts in succession, acknowledged as a world record at the time.

Aachen’s transition from a racing career to a stud career was just as impressive.

By another very successful sire Springfield Globe from Connenora

Springfield Globe was the son of the super sire Globe Derby.

Aachen’s progeny include Richmond Lass, the last pacer to win an Interdominion Final at the Wayville circuit in 1969.

I listened to that final and was inconsolable as Adios Court was one of my very favourite pacers.

Another person, who I could safely say was disappointed that Adios Court did not win that evening was a future BOTRA Life Member Jill Neilson.

Jill was a young lass who helped handle Adios Court for the family owned pacer.

Another of Aachen’s progeny was the brilliant Bylaw which ran second to Bold David in the 1970 final at the Melbourne Showgrounds.

Bylaw was trained by Bob Norman and was driven by Dick Webster.

Aachen was born in 1952, and was bred by the legendary Edgar Tatlow.

Bob Norman, on a visit to Tatlow’s Derby Lodge bought the weanling and in due course named it Aachen

So why did Bob Norman name it Aachen ?

One could perhaps think it was named after the German town of the same name.

It is acknowledged he derived his name because of Bob’s ingenuity.

By naming it Aachen, with emphasis on the ‘Aa’ that it would be listed at the top of a sires list at some stage.

if that’s the case, Bob Norman was a Nostradamus back then as Aachen indeed made it big time as a sire.

Aaron a winner of 26 races, was a talented horse that that won a SA Sapling Stakes and a SA Breeders Plate.

That Mr Nesbitt should acquire the handsome looking Aaron is a case of deja vu of sorts.

When Aachen was striving for his 21st straight win at a meeting at Gawler in 1959, it was defeated narrowly by a pacer raced by Mr Nesbitt

The pacer that beat Aachen being Aaron’s mother Petite Maid!

Dancin Lou to stand down under 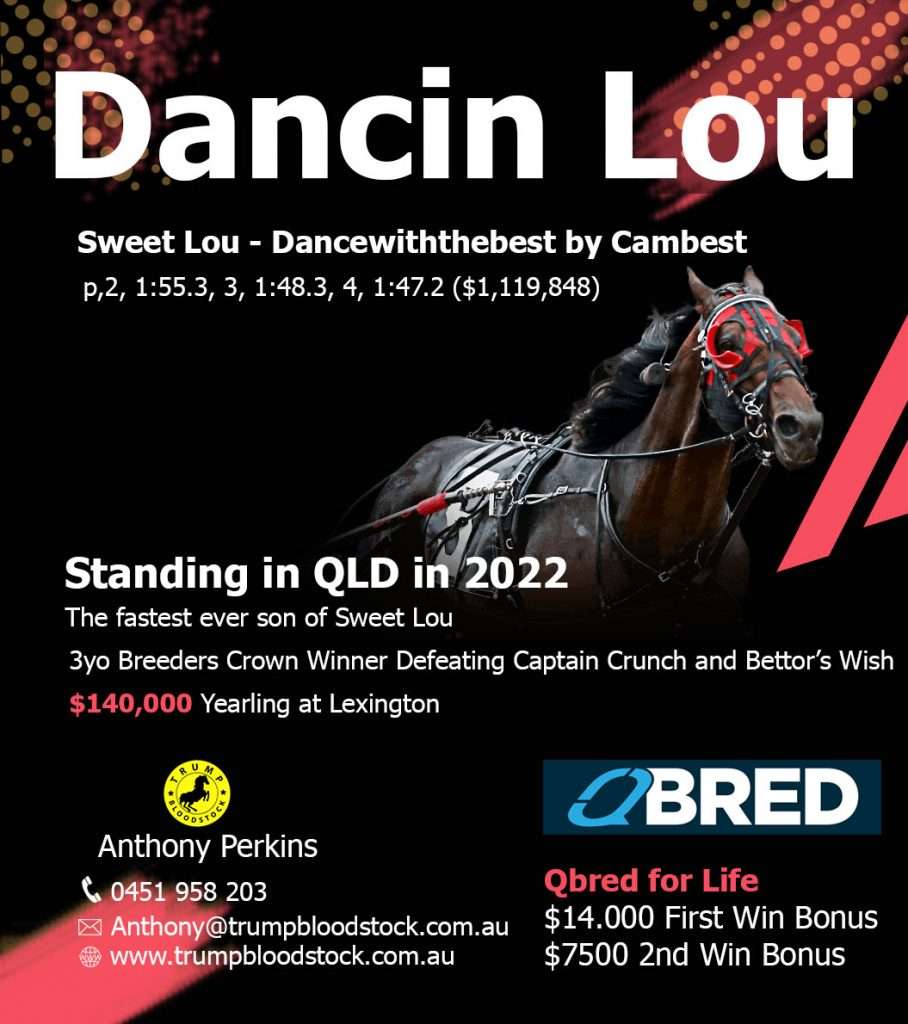 The establishment has bred a host of champions and a proliferation prolific number of winners in that span.

Some of the Norman family involved at Allenby Lodge over the years include CH “Bob” Norman, who was the originator of the breeding  establishment back in 1952. Whilst being a legendary breeder both locally and nationally in Australia, many would not know that he actually started training horses before his equally       legendary trainer brother Reg Norman.

Subsequently, Reg became the sole trainer and Bob controlled the breeding side of one of the most  formidable family operations in Australian harness racing.

After Bob’s death in late 1979, his son Hughie and daughter-in-law Lorraine took over the running of   Allenby Lodge. Unfortunately, tragedy was to strike when Hughie was killed in a farm accident in early 1981, barely a year after his father had died.

Barry Gower, who had been promised “a couple of weeks work” by Bob in 1965, was by then a long-term employee and was able to take on the management of the property. It was at a crucial time, as Hughie and Lorraine’s children were still at school and little did anyone know, but a game changing stallion had also not long arrived.

That horse was Happy Talk, by the great USA sire Most Happy Fella. He was the last stallion imported to Australia by Bob Norman, but ironically he never got to see his final purchase, as flight delays saw Happy Talk arrive at Allenby Lodge ten days after Bob passed.

Hughie’s oldest son Stephen had expressed a desire to leave school nearly straight away to come and work on the property, but Lorraine urged him to see it out to end of year exams.

Having done that and after serving a few years of  apprenticeship with Barry Gower, Stephen and his new wife Teresa became the latest and still currentproprietors of Allenby Lodge Stud.

Under the watch of Stephen, the very successful sires No Direction and Surmo    Hanover were brought to the property, before a period of hiatus occurred due to a growing family.

As is well known, Allenby Lodge is back in the stallion game now with the richly bred and performed son of Art Major in Major Secret.

I will elaborate though on one of the very best Allenby Lodge sires, that being the magnificent Aachen.