The Bull has arrived at Llowalong Farm

The handsome stallion Raging Bull is unique in that his pedigree combines the best of both the Northern and Southern Hemispheres.

So now the 2008 son of Christian Cullen and the Artsplace mare San Sophia is heading across the Tasman to Llowalong Farms to take up residence for the forthcoming Breeding season.

The lure of the Vicbred Colonial First Win Bonus of $12,000 was certainly an attractive carrot in relocating Raging Bull . . . as was the fact that another very successful son of Christian Cullen in Alta Christiano had sadly passed away a season or so back.

Raging Bull looked to have a huge future when he commenced racing in 2011 from the Cran Dalgety barn. Christen Me was a stable mate at the time and Cran could not separate them in their two-year-old ability.

“Raging Bull had a beautiful gait, he was smart and full of self confidence and ran like Christian Cullen.   It was most frustrating that we never ever saw his untapped potential,“ said Cran recently.

San Sophia is by Artsplace, now clearly established as the greatest Broodmare sire in the history of the Sport, and is the dam of nine winners of over $700,000 and three in 1:55.

Raging Bull retired to stud in New Zealand in 2013 and from limited opportunities [just 66 foals that are now four-year-olds and older] he has sired 25 individual winners.

Raging Bull, who is a son of the incomparable Christian Cullen, can hopefully now take over the mantle of the deceased Alta Christiano.   He has been a revelation as a sire following a relatively humble beginning.

He is in fact in third position currently [ 23rd June ] on the Australian Sires List for the 2022 season based on average earnings per starter [ minimum 80 starters ]. Behind him are the superstars of our breeding industry in Bettors Delight, Somebeachsomewhere, Art Major and American Ideal.

Raging Bull will arrive at Llowalong Farms on 30th June and will have a Service Fee of $3,300 incl GST for his debut season in Australia. 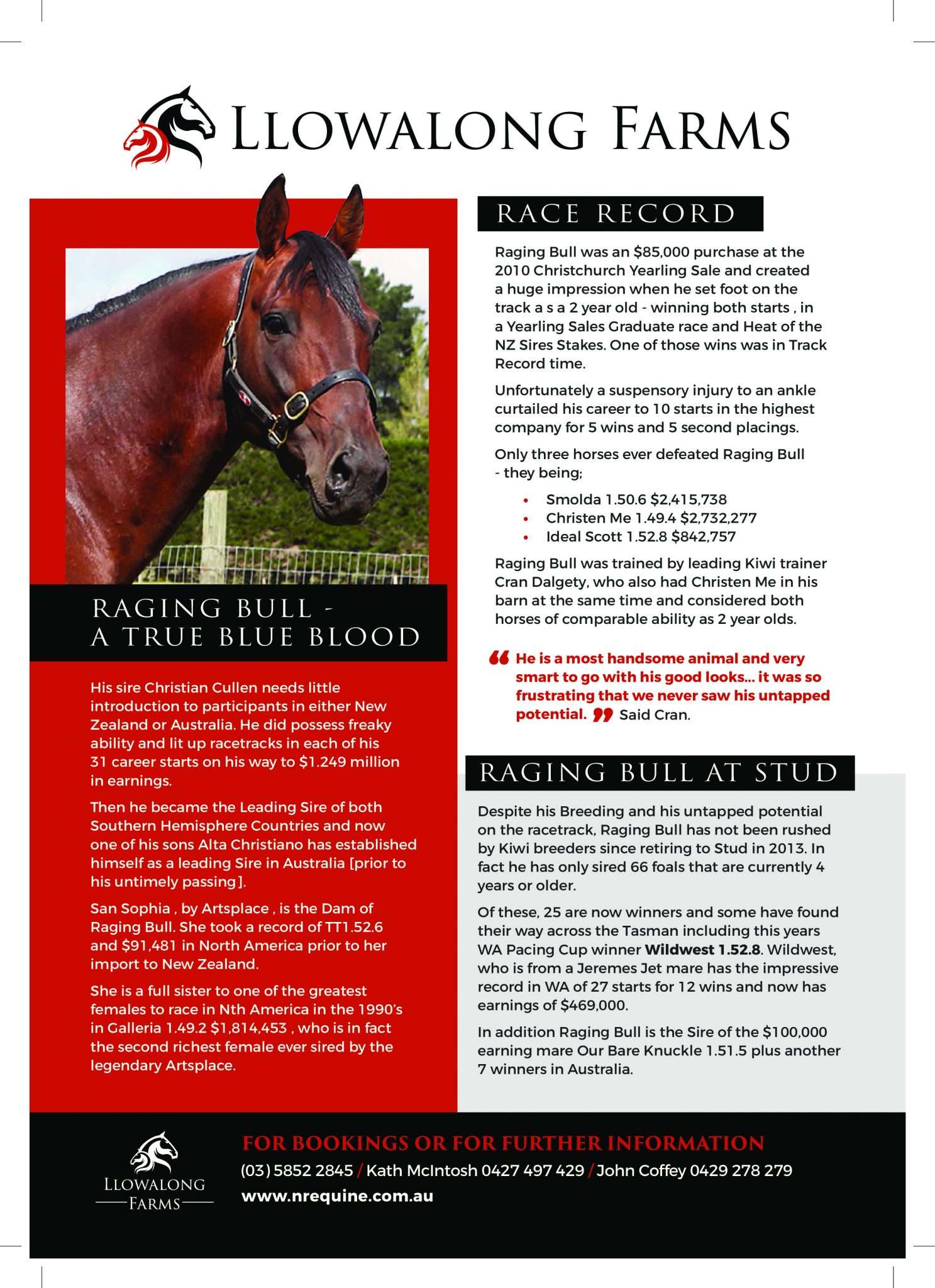